Without a doubt, the 20th century was the century of the car. Automobiles came into their own and changed the culture in America and across Europe. 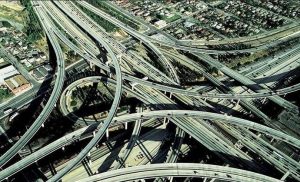 Cities existed long before cars, but some areas, such as Los Angeles, grew up with cars at the center of their planning and culture. From the Smithsonian:

The car of the 1920s changed the way that people interacted with the city and how it purchased goods, for better and for worse. As Richard Longstreth notes in his 2000 book, The Drive-In, The Supermarket, and the Transformation of Commercials Space in Los Angeles, the fact that Southern California was the “primary spawning ground for the super service station, the drive-in market, and the supermarket” was no coincidence.

As strange as it may seem today, the automobile was seen by many as the progressive solution to the transportation problems of Los Angeles in the 1920s.

And a big part it was racing. France dominated automobile racing in the late 1800s, but it soon gathered interest across Europe and made its way to America. In 1901 Henry Ford upset Alexander Winton, the country’s foremost racer at he time, in a race that would allow Ford to attract the notoriety and investors to start the Ford Motor Company less than two years later.

Ever since, manufacturers have used racing to highlight their brands and test technologies for eventual road use. Automobiles and racing have been an important part of life in much of Europe, particularly road racing, with local and regional races, such as the Mille Miglia. Meanwhile in America, oval tracks dominated with the Indy 500 and as moonshine bootlegging gave rise to NASCAR.

However, as we move towards the mid-part of the 21st century, cars, and especially the internal combustion gasoline engine, are no longer the hot new technologies. One can see that cars are generally no longer as important to younger people as they were to previous generations. With the rise of services like Uber and Lyft, many people see car ownership becoming a thing of the past.

But does it go beyond that. Do cars themselves become a thing of the past.

As we look at EVs and even self-driving cars, one wonders if these are the future or merely stop-gaps that will become the new relics, simply footnotes in history. To date, they have been almost comically clones of the twentieth century automobile, mimicking cars as we have always known them, with such things as fake radiator grilles and some even produce fake combustion engine sounds.

This is normal with new technologies. The first cars looked very much like the horse-drawn carriages before them.

Certainly Tesla has done the most to introduce new unique features and styling, but in the end, it’s still a car, like its legacy counterparts, driving on the same roads and being measured by the same standards. Are EV cars really all the 21st century gets? Is it really a significant leap? Are cars simply going away? And if so, what does the post-car world look like?

These things take a long time to change in practice, especially with over a century of infrastructure and support systems behind them. The end of the car era is sad in many ways, but it certainly seems that the writing is on the wall; all things must have an end and it certainly seems like we’re in the waning days of the automobile. The car brought a certain freedom of mobility, and a personal private space — many a teenager lost their virginity in the back seat of a car. Essayist Jean-Francis Held suggests, if a collection of automobiles was preserved in a garage-tomb after a nuclear cataclysm, “some skillful archeologist . . . would be able to deduce from them everything that we were.”

And so what will be the 21st century equivalent?

← Save The Date: Internet-Wide Day Of Action February 27
140plus.com – Another Twitter App Bites The Dust →