Google’s recent earnings miss translated into a loss of nearly 5% in market cap. Is it simply a case of unreasonable expectations or is there more to it? Analyst, Shudeep Chandrasekhar recently took a look. 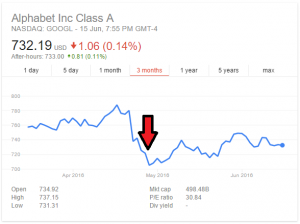 At first glance, Alphabet seems to have delivered a solid quarter but look a little deeper and you’ll find a mix of good and bad.

Mr. Chandrasekhar points to the following factors, all related to the general shift toward mobile:

As mobile usage grows stronger each year it will continue to impact Alphabet’s margins in greater measure.

Alphabet is essentially paying more to advertise on mobile networks, but its earnings per click have plateaued out.

The revenue per click from smartphones is less than half those of desktop.

As mobile usage keeps increasing, ads are going to get cheaper but more effective. This is great for a company that’s advertising but not as much for the network itself.

Google isn’t the only player in town for mobile:

In the desktop web search space Google has been the dominant force for years; the same cannot be said for mobile, where Facebook already has a very strong mobile ad network and is moving fast into video advertising.

Alphabet is still a lumbering giant that hasn’t found its strategic direction.

Search revenue continues to bear the load of overall profitability, but we’ve seen that a very small earnings miss at this point can wipe out tens of billions of dollars in market cap. To exacerbate the problem, the 18 times forward P/E ratio means high expectations from the market itself.

The conclusion is that Alphabet, parent company of Google, needs to find more revenue streams and so far has been extremely slow in making progress in this area. Consider that in terms of cloud revenues, Google is still far behind the likes of Amazon’s AWS, Microsoft’s Azure and even IBM’s SoftLayer.

What [Google] lacks is the consistency of effort, and this is why it failed in so many projects that were originally intended to “change the world.”

Back in 2012, I compared Google’s situation of dominance of desktop web search with AOL and dialup internet circa 2000.

If Google hasn’t found a similarly sweet, high-margin alternative revenue source by [2016], that’s when the revenue numbers will really start to show it.

I predicted that it could take ten years (starting from 2011) for the long-tail of Google’s desktop web ad business to really feel the revenue pain, to the tune of a 75-80 percent reduction. Mobile search will pick up some of that revenue, but Google will need new streams of revenue to maintain their dominance.

← Will the death of phone subsidies change consumer behavior in the US?
What I learned in 2017 as CTO for a VR startup →