The Secret app is a new iPhone app for sharing photos and text anonymously.

The sharing model of Secret is unusual and intriguing to me.  According to their FAQ:

Your secrets are delivered anonymously to the people in your Contacts who are on Secret.

Ok, so right there, although it may not be obvious on first glance, we have something that is fundamentally different than most social apps. With apps like Twitter the recipient decides to follow someone, or with Facebook, she ‘friends’ someone. As the recipient, you decide what users’ stuff you see. In the case of Secret, if we take the FAQ literally, the senders essentially decide for you what stuff you see. In other words, who you ‘follow’, or your effective ‘timeline’, is determined not by you, but by the sending parties, by who has you in their contact list.

That means the first kinds of posts you will see are those shared by people that have you in their contact list. 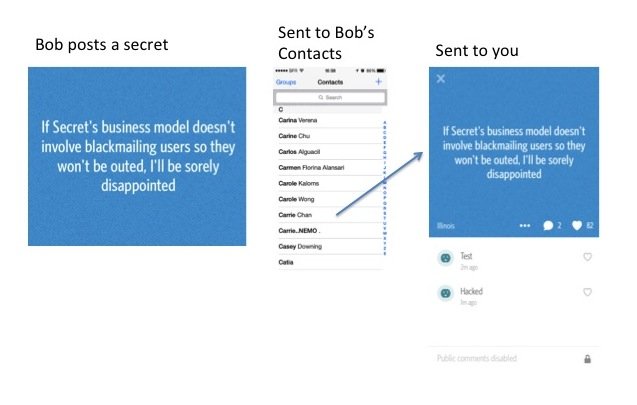 You don’t decide what you see, but the senders do. This also means that what you see in your Secret timeline could be coming from a relatively small number of people, in fact the entire thing could have come through one person in theory.

The Secret FAQ goes onto say:

When friends love your secret, it will be shared to their friends.

Again, the FAQ is described from the perspective of “you” being the sender. If we reverse this to “you” meaning the recipient, to think about what posts you will see,  your effective ‘timeline’ will also include posts that were liked by people that have you listed in their phone contacts. It’s not clear how many degrees that Secrets may propagate – perhaps there is no limit. The FAQ does say the following:

That doesn’t specify a limit, so perhaps there is none and Secrets spread wider and wider as long as they keep getting liked.

That means everything you see was either shared directly or liked by someone that lists you in their contacts. What posts you see is based on the contents of other peoples’ contact lists, what they post and what they like, and it doesn’t have anything to do with who is listed in your contacts. If that is not correct, then Secret should update the FAQ to make it more clear.

The example below presents a deconstruction of an example Secret timeline (stream of posts) and how it would have been theoretically assembled by the Secret app: 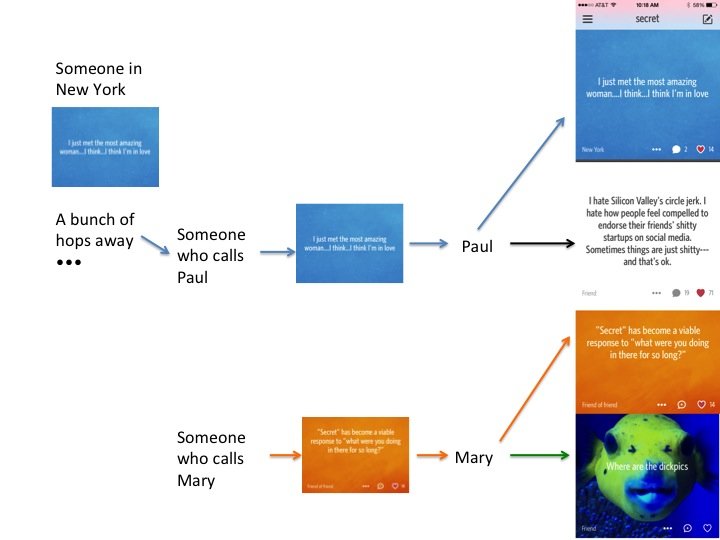 In this example, you see in your stream (timeline) four posts. Here are the four items with the explanation of how they got there:

All the posts arrived to you via two people that have you listed in their contacts in this example. Two of those posts were posted by those two people directly and two of them were each liked by one of those two people. One post is only two hops away (friend of Mary) and the other is some larger number of hops away and eventually arrived in Paul’s timeline because someone that lists Paul as a contact liked the post and, in turn, Paul saw the post and also liked it.

Again, what posts the Secret app shows you is determined by the contents of other peoples’ contact lists. Contact lists are of course not always bi-directional: just because you list someone doesn’t mean they list you. Also, since the Secret app is going to send to every one of your contacts, that is going to be a diverse spectrum of category of contacts, from very close family to the pizza place down the street and everything in between. Therefore, we can expect the contents of a Secret timeline to be radically different than that of any other social network, which potentially helps with anonymity, making it harder to track a post back to its source, but only if you have enough sources for posts, which is one reason the Secret FAQ also says:

Until you have at least three friends sharing, we’ll withhold secrets to ensure we can protect anonymity

Secret appears to be a very unique model. I don’t think we’ve ever seen anything quite like it. Your contact list determines the first hop for new things you post and the next hop for things posted by others that you like, but other peoples’ contact lists determine what posts you see.