By now you have probably seen the screen shots of iOS 7. It is extremely white, wow, and yes, it’s “flat” too. 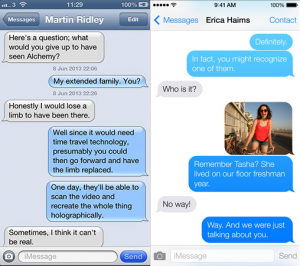 I have not taken the deep dive into all the features and changes yet, but already I can see that it’s a much bigger shift than I first thought.

There have been some iOS releases in the past that required major changes to apps. iOS 4, 5, and 6 each had something big that changed in some significant way. However, each of those still provided developers with some means to ensure their code could support the new OS and still support older releases too, within reason. iOS 7 is going to be different. iOS 7 apps will have to contain A LOT of extra code to support pre-iOS 7. I expect this to mean a lot of new apps will require iOS 7 and have no support for older versions of iOS.

It’s going to take a lot of work, mostly redesign, to make your app fit nicely in the new iOS 7 style. iOS apps tend to be made of a lot of PNG images. Interface elements designed for pre iOS 7 are going to look terrible on iOS 7 and likewise interface elements designed for iOS 7 are going to look ridiculous on iOS 6 and prior versions of iOS. I doubt very many app developers will take the extra time and effort to create and maintain two entire interfaces in their app. To say nothing of how much larger the apps would have to be to do so.

So that’s one thing. I think iOS 7 is going to be a fork in the road that leaves some users behind, specifically those on older devices that won’t even run iOS 7 as well as all the luddites out there that refuse to upgrade (I know some people still using iOS 3 and iOS 4). Slowly, those users will become stranded on stale versions of apps that are no longer updated for the older iOS versions. We saw this with some of the first versions of iOS, where there were so many new features in the SDK that made life easier for developers that often new apps never provided support for older iOS versions. I think it’s going to be even more so for iOS 7, more because of the interface changes than new SDK features. Getting users to upgrade is one place where Apple has done well so far, but there are always stragglers; and this OS won’t even run on a lot of devices that are out there, so it might be different this time.

For me, the biggest disappointment in iOS 7 is the continued lack of customization and integration options. The popularity of jailbreaking iPhones should be indication enough to Apple that users want more customization. And I’m not talking about ringtones (well, I am talking about ringtones, but I’m not talking just about ringtones). According to a ReadWriteWeb survey, making iOS more customizable topped the list of features users want to see in a new iPhone OS. Apple is going to have to loosen the grip, but unfortunately it doesn’t look like that’s something they are doing with iOS 7.

What I’d like to see in this regard comes in two flavors. First, is simply the end-user’s ability to customize their device, to make it their own. This should include custom themes, launchers and shortcuts, lockscreen options, keyboards, and some of the gesture mods that are available on the Mac. All Apple has to do is look at the apps available for jailbroken phones for ideas of what people want. It’s not that hard and it’s way past due.

Second, from day-one of the iPhone having an SDK and third-party apps, I’ve been saying that Apple needs to provide some SDK integration / widgets / hooks, for the pre-installed apps, and particularly API interfaces to messages and, even better (but less likely) phone calls themselves. Apple doesn’t want apps to “duplicate core functionality” but what about when a third-party version is better than what Apple provides? What about letting users decide? Or at a minimum, how about at least an SDK for interacting with incoming SMS and iMessage (and FaceTime?) – there is already a privacy and permission model for it in how apps access GPS and Contacts etc. I do want apps running in a sandbox; nobody wants a free-for-all for hacks and malware   – but it’s time for the sandbox to get a few more toys.

← Android vs. iPhone development experience
Another perspective on “Why mobile web apps are slow” →