In a piece titled “How Apple Gets All the Good Apps,” Walt Mossberg points out that Apple’s direct competitors — Google, Microsoft and Amazon — all have official versions of their apps for Apple devices. He asks:

So, why do Apple’s rivals help make iPhones and iPads more versatile when Apple doesn’t return the favor?

The article portrays Microsoft, Amazon, and Google as standing up for the little guy “to help make iPhones better” while mean old Apple is the kid who won’t share their toys. Typical.

Sorry, but Apple’s major mobile-platform rivals are not acting out of the goodness of their heart. While Mossberg repeats the myth in saying “Although Android devices are the most popular…” he does note that “the Apple market is too big to ignore.” Please. The following chart shows just exactly why Google spends more resources on iOS apps than they do on apps for their own Android platform: 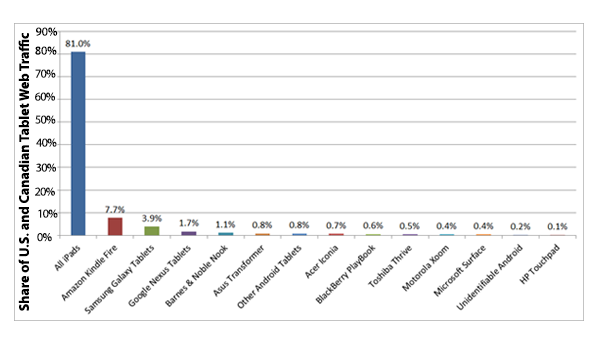 To paraphrase John Kirk in his article “Andy Rubin And The Curious Failure Of The Nexus Tablet” Google makes no income from the sale of devices using Android. If Android devices are not used, then they are useless to Google. Let me repeat that in case you missed it: Google doesn’t make any money from Android. They make money when users click ads. Despite the supposed “Android dominance” it’s quite clear why Apple’s rivals focus on apps for iOS: that’s where the users are.

Meanwhile, this panel led by Victor Agreda, analyst Gene Munster and pundit MG Siegler, thinks the recent spate of negative Apple news is “mostly perception, and partly cyclical” and that “the coming months will see Apple getting its groove back.” Many agree and think APPL stock has hit bottom and will be rising – of course the usual suspects disagree.

For my part, stock price is seldom a good indicator of company health or performance. It always lags reality, even though Wall Street “experts” claim the opposite. But this ridiculous notion of “good guys versus bad guys” is just annoying and melodramatic.