You may have heard me already poking fun at Microsoft Surface as the “Zune 2.” I’m not the only one of course to make that comparison. ZDNet goes so far as to suggest “Microsoft’s greatest hardware fiasco ever?” 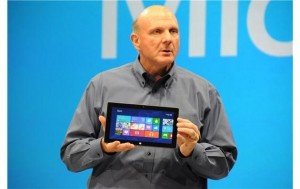 I still feel that Surface may be turn out to be just that. Everyone knows I’ve never loved Microsoft, but when everyone else is kicking them, I have to admit I feel a desire to be the contrarian and defend them. If nothing else, I have to give credit to Microsoft for being bold, or at least bold for them, more so with Windows 8 and Windows RT than in Surface itself, but don’t kid yourself, Surface is all part of a larger Windows strategy. It’s not just a tablet to compete against iPad — it’s a strategy to save the company and keep Windows relevant.

The path toward Microsoft irrelevance has become palpable over the past few years. Companies can now totally ignore Microsoft and still carve out a very successful business. That simply wasn’t true five years ago. Internet Explorer has become a joke. Windows Phone has gone nowhere. Microsoft has ceded over fifty percent of its presence outside the enterprise to Apple, Google, and Amazon over the past few years, most of that to smartphones and tablets, but also to Macs and the cloud. And the rate of that shift is increasing.

Surface is Microsoft’s attempt to recover some of that lost ground and to ultimately make their way back into the public mindshare. Will it work? It’s too soon to tell. From a consumer perspective, buying into Surface is a big risk, for many of the same reasons buying into a Kindle Fire or Google Nexus tablet is a risk. It’s not a matter of the cost or whether it or has more or less memory or a “retina” display. It’s about apps and whether it will have a thriving ecosystem in a few years or whether it will be sitting in the closet collecting dust, like your Zune and Sharp Zaurus. These devices do not exist in a vacuum. They are not the sum of their CPU, memory, and screen. They need a support system and a community to remain relevant. Without updates and support, they are doorstops.

Apple has a sixty to seventy percent market share dominance. The company now has more than 700,000 apps in its App Store and as of July 2012 they had paid out $5.5 billion to developers. The ecosystem is thriving. Consumers can buy apps that will run across all their iOS devices. By jumping to a second-tier platform, especially a totally unproven one like Microsoft Surface, consumers take a much bigger risk of finding themselves orphaned at some point.

The strong argument for Microsoft has been for a long time: “I need ‘real’ Microsoft Office.” That draw has become less and less powerful over the last several years. First, Office is available on Macs. Second, the Office-substitute tablet apps and cloud-based apps have gotten better, while the need for “real” Office has diminished as more and more people switch to using these alternative Office-substitutes it becomes more common for users to no longer expect or require “real” Office. As a result, the need for “real” Office has become more and more niche. And I don’t think Microsoft Surface can afford to be a niche device. It’s going to have to at least take second place in this fight. That might make Surface and Windows Phone 8 more a threat to Google and Amazon than to Apple.

The “I need my PC apps” Hook

If this is the hook for you, then you need to wait for “Surface Pro” due at some as yet unannounced time in the future (something Microsoft wishes everyone would stop asking about) because Surface doesn’t run “legacy” Windows/PC apps. This has been a big point of confusion for consumers and Microsoft:

…in our 30 minutes wandering around the store and eavesdropping on conversations between sales staff and customers, almost every single time there were the same stumbling blocks: staff have been trained to sell this as all the goodness of the Windows you are familiar with, plus a bonus extra touchscreen-style tablet system, all in one. And with customers sitting down to what looks like a laptop, and then seeing that all-familiar Windows desktop — “how do I get to ‘My Computer,’” we heard a few people ask — an awkward moment inevitably approaches.
— At The Microsoft Store, Corporate Intelligence

Overall, I think Microsoft is trying to steal a page out of Apple’s playbook here. Instead of hoping Surface will start in the enterprise and move to the consumer, I think Microsoft is hoping it works the other way around. They are trying to create a consumer success and then hope that translates to the enterprise so that when people “Bring Their Own Device” to work, it will be Surface and Microsoft is hoping I.T. departments will find Surface to be a lot more comfortable to work with.

But is it too late for them? By the end of this year, there will be 100 million iPads and tens of millions of alternative Android-based devices in the hands of consumers. By the end of 2014 it will be at least twice that many. What dent will Surface have made by then? I don’t think the “Office” draw is anywhere near as strong as it used to be, not powerful enough to make the Surface a success on that point alone. What else does it have going for it? Some say Windows RT is better than iOS and Android. Again, time will tell, I guess. I’m not calling it one way or the other for sure, but I think Microsoft’s chances are slim.

Note: I have no plans to buy a Surface, but if Microsoft wants to send me one to evaluate, I would be happy to do that and I promise to give it a fair shake.

← Effects of Twitter’s API and policy changes will be gradual but profound
It’s BI. And it’s Henry Blodget. But I tend to agree: Where Are The Android Users? →