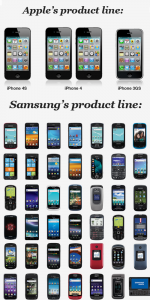 Is this really what you want? Shorter release cycles lead to fragmentation.

Dan Rowinski at ReadWriteWeb, said yesterday that Apple has a problem, citing IDC research that claims Android accounted for 68% of smartphone shipments in 2Q12.

IDC notes that Samsung was responsible for 44% of all Android devices shipped. That equates to 46.11 million devices, or about 20 million more than the iPhone.

As I’ve noted before, Apple cannot do what their rivals did, and ignore the very real threats, but I think where Mr. Rowinski misses the mark is suggesting the solution is for Apple to be “Chasing the Android Freight Train,” as he calls it:

[Apple’s] one-device-per-year approach (with older devices dropping in price at the same time) can’t seem to up with [sic] new Android devices developed and shipped seemingly every week.

He suggests “accelerating the iPhone release schedule” as a tactic to combat the “Android momentum:”

the sooner Apple can get the newest iPhone on the market, the more chances it will have to stand firm against the Android armies.

I completely disagree. I think that’s exactly the wrong thing for Apple to do. Apple’s more sane approach to release cycles is a huge competitive advantage. I would call the fragmentation in the Android space resulting from “new Android devices developed and shipped seemingly every week” is a runaway freight train headed for a train wreck, not something to be envied. It is a key reason why the Apple ecosystem remains so utterly and devastatingly dominate. Flurry Analytics reports that for every 10 apps that developers build, roughly 7 are for iOS.

Apple’s interface is becoming a bit dated and I think apps like Flipboard really show it (a post in itself for for another day), but jumping into the “upgrade of the week” game would be a huge mistake for Apple. Apple’s more paced release cycles contribute to a much more robust and lucrative ecosystem. And the ecosystem is everything. It creates opportunities for wealth through low barriers to entry for developers and throngs of paying customers, with Apple taking a healthy cut along the way. As Flurry notes: “The age of middle-class app developer has arrived.”

Apple cannot ignore competitors, but actively driving toward Android-like fragmentation, the biggest single problem faced by Google with Android, and the biggest competitive advantage for Apple and iOS, is not the answer.