Gizmo5 (formerly known as Gizmo Project and SIPphone) will be shut down by Google April 3, 2011, according to the website. Google acquired Gizmo5 in November 2009, reportedly for around $30 million.

With the passing of Gizmo5, so goes one of the last and largest open-standards based VoIP services. Gizmo5 supported the interoperable SIP Internet standard protocol. That meant it worked with any SIP hardware, software, PBX, etc. Most VoIP services, especially the consumer-focused ones, including Google Voice, do not support standards, and instead require proprietary, closed, hardware or software.

As can be seen below, from a snapshot of the SIPphone.com site in 2004, the company started off being an advocate for SIP and open-standards, with an emphasis on free SIP to SIP calls, using any compliant device or software that you want. 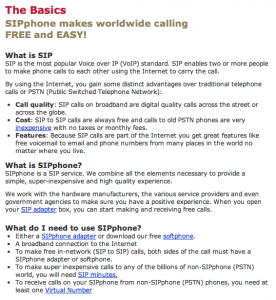 In fact, back in 2008, Michael Robertson (CEO of Gizmo) wrote a long open-letter on the subject: Gizmo Project’s Michael Robertson Sounds Off explaining about how Skype was closed (it still is) and why being interoperable was a good thing for competition, etc. You could pretty much take that letter today, and replace “Skype” as the target with “Google Voice” – for instance:

If Skype truly believes there should be open competition then they should start by enabling other networks such as Gizmo5 to call Skype users in an official and supported capacity.

Reads just as well as:

If [Google Voice] truly believes there should be open competition then they should start by enabling other networks such as [Insert Third-party-Provider Here] to call [Google Voice] users in an official and supported capacity.

I guess it was convenient for Gizmo’s business objectives to “wave the flag of openness” back then, but it apparently isn’t so for Google and Google Voice now, who conveniently ignore competitors, as well their own customers’ requests for openness and interoperability.

It sucks.  The suits won. I expected better from Google.

1 comment for “Closing of Gizmo5 / SIPphone, a sad day for open-standards VoIP”