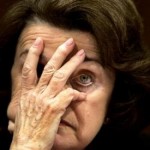 The pundits were right in saying the scandalous Bailout Bill, aka “Leave No Banker Behind”, would probably pass in the Senate, despite overwhelming opposition of average Americans, on the left and right.  After all, only about 1/3 of the Senators are up for reelection, so most of them can assume voters will forget by the time their re-election comes up.  For example, here’s what my California Senator Dianne Feinstein said (via CBS News):

How’s that for contempt?

According to a half-dozen offices, the phones and fax machines and e-mail folders were piling up with constituent reactions. The phone lines and email servers became jammed. The Wall Street Journal has called it “Voter Fury”, “an intense outpouring of voter anger”, and a “Populist Revolt”. The New York Times went so far as to call it “Class Warfare”. And note that these are from the traditional press (you can imagine what the alter-media has been saying). And yet, it passes the Senate by a huge margin anyway.  So much for democracy and representation of the people.

Some experts think the bill will still have trouble in the House because more Representatives will soon face the wrath of the voting public if they pass something the people clearly don’t want.  We’ll see.

There is one other person who cast a YES vote tonight who is hoping for votes in just a few weeks: Sen. Obama – and he is losing my support because of it – I think I can remember that long.  His vote tonight shows that he does not represent “Change We Can Believe In” – he represents no change at all.  As a result of Sen. Obama’s vote tonight in favor of this shameful 451 page Wall Street bailout bill, I regret that I must withdraw my support for his candidacy.  Not that he cares, for sure, but I wanted to get that on the record. And, no, I won’t be voting for the McCain/Palin ticket instead (McCain also voted for the bailout, for whatever that is worth).

Are we not beyond being just annoyed yet?  Are you not outraged that not only are the people responsible for this mess not going to jail, they are not even losing their jobs!