The Harris Interactive data shows that about 14% of adults use a cell phone exclusively for voice communication, which aligns well with the recent CDC research which showed 15.8%. 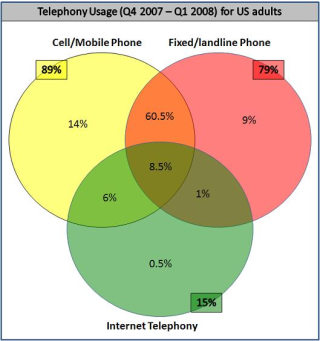 One interesting thing about the Harris Interactive data is they separate out Internet Telephony (VoIP) usage.

This data shows 15% of adults use VoIP, a pretty impressive number. But only 0.5% use it exclusively. That is not surprising.

This suggests a disconnect with what VoIP users say they want to do, and what they actually do. We see a lot of talk about “firing your phone company” but in reality this isn’t happening, even among these first phase early adopter VoIP users.

← FYI: Telepresence is not “new”
Clinton shows her colors →