There has been a bit of buzz about the latest statistics from CDC/National Center for Health Statistics on fixed/mobile substitution (FMS). As Dean Bubley says “it’s quite refreshing to see a genuinely independent piece of research.” The CDC began looking at FMS to determine whether their current telephone survey approach for collecting data that calls only landline numbers might be skewing their research on health issues – unlike data from other sources, the CDC doesn’t have an axe to grind in the telecommunications arena.

They show a steady increase since 2004 in the percent of households with only wireless service. At the end of 2007 this number was up to 15.8% – it was only 5% in 2004. This roughly three-fold increase over just three years has to be a concern for fixed-line carriers. It must be of particular concern to those without a wireless offering, such as many rural and second-tier local exchange carriers (LECs).

What it tells me is that despite the hype, “cord cutting” is not really an aspirational thing at all – it’s more driven by circumstance (economic or social).

One of the only good bits of news for those depending on landline revenue is that the increase in the percent of wireless-only households dropped off in 2007: 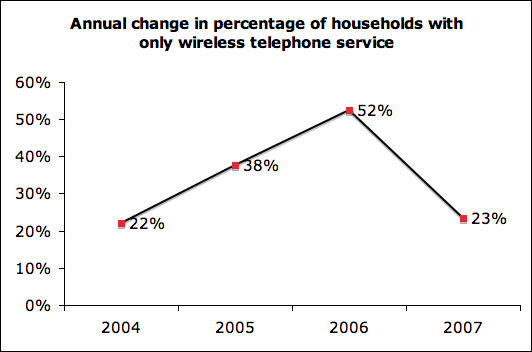 What happened in 2007 to cause the drop in percentage growth?

← Why Vonage spending more on marketing won’t work
FYI: Telepresence is not “new” →