Tom Keating notes research indicating that one fifth (21%) of U.S. households have never used email. The source is a survey by National Technology Scan. Age is clearly a factor – 50% of those who have never used email are over 65. However, beware of discounting the result based on age. If we look at distribution by age group of the U.S. adult population we see that the 65+ segment accounts for 17.4% of the adult population: 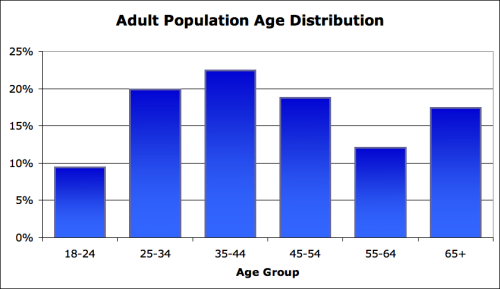 Half the 21% of people that have never used email are coming from these other segments. I wonder which ones?

As can be seen in this chart, the largest segment is the 35-44 age group (22.5%). It would be interesting to compare the overall U.S. adult population above to a similar chart for the facebook population, or perhaps twitter. In practice, this could never be done because nobody has accurate data on the ages of facebook users (not even facebook themselves).

Those of us that are close to the latest technology trends tend to lose perspective. We assume the general population is like our friends, using twitter, AJAX, Python, or whatever the latest buzz is buzzing about. Research like this, showing 1 in 5 people don’t use email and don’t plan to, are good reality checks. My personal benchmark is PTA meetings (or the rough equivalent) – that’s where you can learn how deep a technology has reached into the mainstream. A PTA meeting will be populated with the larger age-group segments above (the big part of the bell curve) and with a wide spectrum of people (culture, education etc.) When you ask these people, most of them have never even heard of Twitter, DIGG, or whatever latest technology may be percolating among the tech-savvy – to say nothing of using it. Even something we think as general, like Skype, will be suprisingly unfamiliar at a PTA meeting.

The companies and products that get most the attention tend to be those appealing to the 18-34 segment, the proverbial “hot” age group. But cooler heads (those looking for revenue instead of hype) may want to take note that this “hot” 18-34 segment is much smaller than the 35-54 segment – and other research shows that the dollars of consumer spending are even more shifted to this older more mature segment.

← Andy points the way
AP says Cox is blocking too →