In March of this year, I was invited to test a new T1 service being offered by COVAD (see press release PDF). In June, I was given some installation dates, one for the local incumbent LEC, now AT&T (formerly Pacific Bell/SBC), and some others for the COVAD part of the installation. After a few fits and starts, the AT&T installer installs a box outside my house. This is the CSU/DSU.

At some point, a COVAD box arrives (referred to as the “Covad DSL Installation Kit” even though this is supposed to be a bonded T1 service, not DSL).

About a week later, the COVAD installer comes to the house. He wants the kit and a place to plug in an extension cord (outside). He takes the router from the kit, and hooks it to the AT&T box outside (setting the router in the dirt nearby) and apparently gets the service working and then cheerfully says “Okay, we’re done.”

Except, what’s the point. Here’s what they left me with: the AT&T box outside the house (not connected to anything): 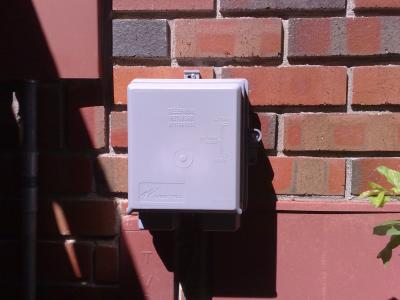 And the COVAD “kit” in a cardboard box (also not connected to anything): 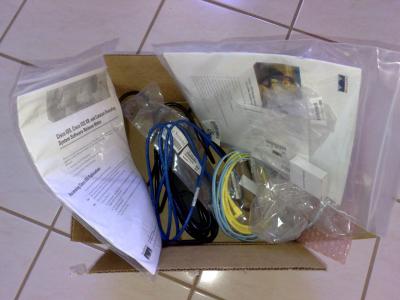 So great. What am I supposed to do with this? There is this little 25ft. of air gap here, folks. I suppose I could use the COVAD service on the front lawn with a 110v extension cord and other kit piled up outside — and hope it doesn’t raiin.

To me, this is another perfect example of how the ILEC (AT&T in this case) will screw over the CLEC (COVAD, in this case) every chance it gets.

The AT&T CSU/DSU is installed in a totally separate (new) box that AT&T put in, next to, but not connected in any way with, the normal phone box where my normal phone lines come in. It requires an RJ48 cable from this box (outside) to the COVAD router (Cisco router) inside.

In this case, COVAD should just bite the bullet and factor in as part of the cost of this service, the act of running the wires from the outside AT&T box to the inside COVAD router. Back in the day, if you were to order a T1 from Pacific Bell, they would darned sure take it all the way to your router. I know this, because I once had a T1 in this same house. I don’t know if that’s true any more, but I would expect it to be the case. Of course, you also pay for that luxury with the cost of the circuit. But anyway, with this new COVAD service, they say that’s my problem. Thanks a lot. Thanks for nothing. So, there it sits, a live T1 separated only by 25ft. of atmosphere, and therefore completely useless, until I either drag a cable myself, or hire a contractor to do it.