We don’t know many details yet, but here’s a photo: 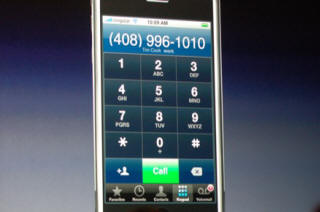 It’s a “soft” screen/keypad, combining the usual iPod features with a Phone, and Internet surfing.

The carrier partner is Cingular (exclusive) and it is supposedly a quadband GSM/GPRS/EDGE with WiFi and Bluetooth! It also has something else other iPods don’t have: a 2 megapixel camera.

The 4 GB iPhone will retail for US$ 499, the 8 GB version for US$ 599 (these are “locked” subsidized prices requiring a 2 year contract). It isn’t going to be available until June (US only at first).

A lot of people recently reported how Cisco/Linksys has owned the trademark on the iPhone name since 1999. It will be interesting to see how that plays into this. UPDATE: Cisco

← AT&T Jacks up rates in California
What is so special about truphone? →