Michael Schumacher put an exclamation point on his amazing career today in Sao Paulo Brazil. No, he didn’t win his eighth world driver’s chamionship. He didn’t even win the race. In fact, he didn’t make the podium.

None the less, he finished his Formula One career exactly the way he started it 16 years ago – making his mark on the sport.

In 1991, fate would land Schumacher in a seat with the fledgling Jordan grand prix team, who had made its debut that same year. In his F1 debut, qualifying for the Belgium Grand Prix at Spa-Francorchamps, he put the Jordan on the seventh grid position, one-and-a-half seconds faster than his vastly experienced teammate, Andrea de Cesaris, who said at the time “All right, he’s fast. But one-and-a-half seconds? There must be something wrong with my car.”

Schumacher’s Jordan had a mechanical failure in the race and never completed a lap. But the world had seen enough. The 22-year-old German’s life had been transformed. 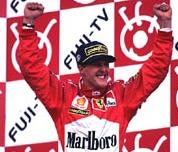 Today, at 37, the living legend drove the final F1 race of his 16-season career in Sao Paulo Brazil. I won’t go into the details of that race here. Those will be written about all over the net. All I’ll say is the seven time world champion left everything out on the track today, sending a chill down the spine of many in the F1 paddock, and around the world, just as he had done at Spa in 1991.

To give his fellow drivers something to think about, Schumacher set a new all-time lap record at the Sao Paulo circuit on Saturday and had the fastest lap of the race on Sunday. He also passed the driver that will be taking over his seat at Ferrari next year, Kimi Raikkonen, in dramatic fashion, wheel to wheel in the Senna S, after a tough battle lasting several laps.

It was a fitting end to an incredible career.

← Where’s all that cheap access now?
My prediction: It will NOT be a Blue Tuesday →