I’m not the typical cell phone user demographic. In other words, they aren’t building these phones for me. Some of the things I care most about in a mobile phone are:

A nice to have is a decent speakerphone. It really comes in handy in the car.

Also to set some expectations, I should probably mention a few popular features I don’t care about in a mobile phone: 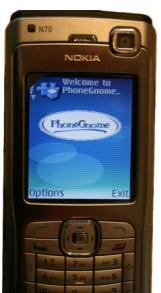 I have actually had the N70 for a while now and this review has been sitting in my pending box for too long. I had put it off because the final thing I wanted to talk about, using the phone with iSync and as a modem on the Mac, required some updates and such on my Mac. I finally got around to that, and so now I have no more excuses.

Before getting the N70, I had an N90 — for about a day. I knew right away that was not the phone for me. It’s a magnificent phone, with a beautiful screen, and an amazing camera. I knew right away though that it was too fragile for my style and it was also rather heavy (with all those really nice optics).

So given all the above, the N70 suits me quite well. It’s pretty much exactly what I want in a phone, and perhaps a bit more.

Screen. The N70 has a large screen for the relatively small size of the phone. It’s much brighter and more pleasing to look at than the screen on my old 6600.

Keyboard. Despite much of the real estate of the phone being devoted to the screen, the keyboard is still usable. The keys are somewhat small, especially the number keys, but it doesn’t require a stylus and I don’t have any difficulty using it, even at my advanced age.

Camera. As I noted above, camera features are not my biggest concern, but I have to say the N70 camera is really handy. It takes photos that can be usable, perhaps even to print and keep. It’s got a slow shutter speed (or digital equivalent) and the flash is pretty useless, but it is possible to take decent pictures, if you’re careful and steady. Catching motion is pretty much impossible. The N70 actually has two cameras. Its got a low-res camera that points forward and is intended to be used for video conferencing. I haven’t used that for anything beyond parlor tricks. The fact that Bluetooth makes downloading photos taken with the phone to a PC or Mac so easy and convenient, makes the camera feature so much more valuable. If I had to hook up a cable, or email the photos to get them off the phone, I would use it far less frequently (if at all). The camera in my 6600 was really limited. The N70 camera is actually practical.

Sound Quality. I see a lot of phone reviews that never talk about actually talking on the phone. The N70 offers good sound quality using the earpiece. It has a built-in speakerphone, which is not too bad. It’s much better than the (almost useless) speakerphone I had on my 6600, but it is not as good as the speakerphone on my wife’s (now ancient) 6610

Messaging and Web. If you use any of the Symbian phones, you already know about the N70. I don’t see anything unique. Other people have covered this pretty well. I certainly encourage using the Opera browser over the default one that comes with the phone. I don’ t have a POP3 client on the phone for email. My service (T-mobile) uses a proxy scheme for email to the phone. Sending an email with the phone is easy using the built-in messaging features.

Using GPRS on the Mac. Mac OS X 10.4 supports the N70 out of the box. The Mac’s modem dialer makes a connection to the phone via Bluetooth and you end up with a TCP/IP connection that lets you use the Internet anytime from anywhere. The phone can be in your pocket while you surf the net. With my T-mobile service I get a connection that doesn’t require a web proxy and even supports other protocols such as SSH (details may vary by mobile carrier).

Java et al. The phone supports J2ME midlets. As can be seen in the photo above, I have a PhoneGnome convergence application on my N70 (see My PhoneGnome Java Midlet). It was easy to install the app via the browser. Apps you add sit in the “My Own” folder on the N70.

I only have a few minor nits with this phone. When a call is coming in, all the keys light up in bright blue. For an old fart like me, it can be hard to remember which key answers the phone and I can’t tell the green key from the red key with the keys all lit up in bright blue (the answer key looks suprisingly similar to the hang-up key when they are both flashing blue). Battery life is not great, although I got used to that with my 6600. Probably worse than the actual life, is the rather non-linear way it goes dead. One minute it shows a full charge, and the next it’s dead. It seems like there is something fishy with the battery level indicator (curious to know if anybody else has the same issue). Basically, it’s usually not that big of a deal. Just charge the phone every night, or worse case, every other night, whether it needs it or not.

Overall, the N70 is a really nice phone. Until a practical wi-fi SIP dual-mode phone comes along, the N70 will continue to serve my needs.