The The Progress and Freedom Foundation, as Marty Kaplan calls it “a corporate-funded fake think tank” has come out against Net neutrality. They say “Net neutrality is, in fact, the theft of property rights from [broadband] infrastructure providers.” Gee, seems like we’ve heard that somewhere before.

I want to look at this from another perspective. Let’s step back to 1996, when we used dial-up to reach the Internet. It wasn’t the telco that gave us Internet service or access to the Internet. We purchased a normal phone line from the telco and then used a modem to let us establish a connection to an Internet service (ISP). The telco really had nothing to do with our interaction with our favorite website of the day, as shown below. 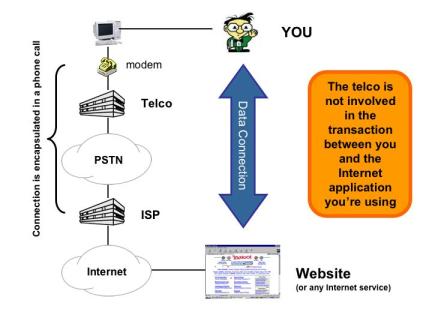 Some creative people, outside the telco (inventors of modems and ISPs) came up with a way for us to use this thing called the Internet in spite of the telco. The telco didn’t invent the Internet nor the means for us to access it.

Later, telcos got involved in the ISP business, but in 1996 we probably got our Internet access from someone other than our telco. The telco didn’t seem to mind then. I guess it might have something to do with the fact that they were basking in the cash from all those second-line phone lines people were buying so they could use this cool thing the telcos didn’t invent (or offer, and didn’t really know anything about) called the Internet. So the Internet, invented by others, made the telcos billions of dollars, even though they had no idea what it was until after lots of people were already using it.

So what they’re telling me is I can literally use the same copper pair to place a dial-up modem call to a third-party ISP and use whatever website I want, but if I use that exact same copper pair using my DSL account, I can’t access that same website?