VoIP is all over the news the past few weeks. Consider the following recent headlines:

Based on the above, one might get the impression that VoIP has arrived and the story is complete. While I think it’s great that VoIP is getting some air-time, let me explain why, in reality, there is very little “Internet” in these VoIP products.

Take the following from the CNET AT&T article:

What a hoot. What AT&T and the other telcos are offering is a way to get from your home to AT&T using the Internet. After that, the call takes the same route as any other, using that same so-called century-old telephone system to reach it’s final destination (which, by the way, is not only ancient technology, but includes a mish-mash of old and new technology, IP and otherwise).

So with AT&T VoIP, the above pictuure changes to the following, replacing your local telco service with the AT&T VoIP service: 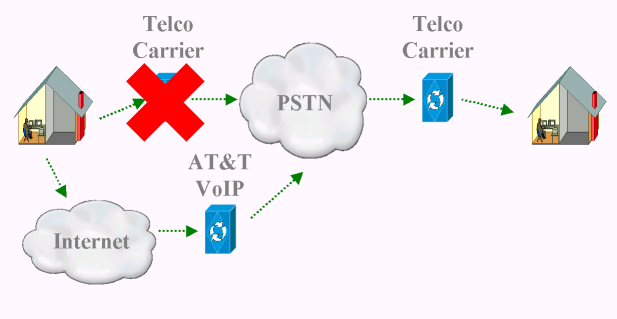 Meet the new boss, same as the old boss

So, okay, these services are using the Internet, sort of. The big sales thrust is lower costs. We keep hearing that calls over the Internet are cheaper. But, as others have also pointed out, this is a weak case (arbitrage of the traditional telco access fees), and will not stand the test of time.

What will ultimately matter about these services will be features, not price. People didn’t get wireless phones to replace their fixed PSTN service. They got them for new features (in particular mobility). For VoIP, we can imagine these features to be stuff like follow-me, smart routing of incoming calls (say one number rings all the phones in the house, while other numbers ring only specific phones), actions based on time of day, caller-ID, etc. Then maybe throw in some IM and Presence, maybe even video, etc. and suddenly it is pretty compelling, even if I’m not saving a dime.

The Telco-centric versions of VoIP they are peddling now are not the Internet-style VoIP that will ultimately develop. 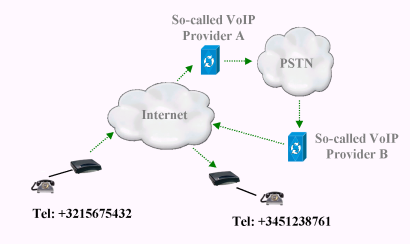 Is this really Voice over IP? — Hardly

The call leaves my house over the Internet to get to my so-called VoIP provider, then goes onto the century-old telephone system, then back onto the Internet again, and finally to the other party. That doesn’t seem very Internet-like.

A true Voice over the Internet system would route the call end-to-end over the net, like this: 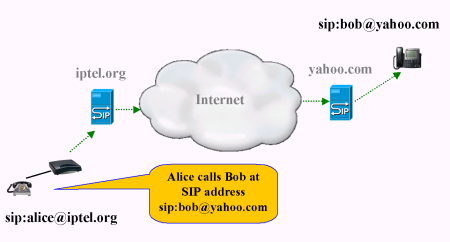 This is scary stuff for the telcos. What’s even scarier is that in some scenarios you don’t even need a VoIP provider at all to make it happen. More on that in a future post.

UPDATE: I have received a lot of feedback to this post, in email and other forms beyond the blog comments. See my follow-up to this post for my responses and additional details.

10 comments for “Why AT&T, Quest, etc. VoIP announcements are lame”