Today a proof-of-concept app I’ve been working on was approved onto the Apple App Store: 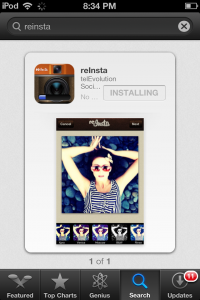 The app is called reInsta. I know, I know. I can hear you now “here we go again, another social photo sharing app.” I get it. The goal with this app is not to “win” the social networking landscape or be the next killer app. I built this app with a familiar set of core features on purpose. Instead of spending a lot of energy explaining what this app does, we can instead focus on the unique aspect of it, which is a “Bring Your Own Cloud Storage” idea.

The app allows users to link their Dropbox to use as the data store for your photos: 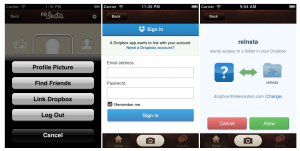 After completing this one-time setup, the reInsta app will now use your Dropbox as the back-end data storage for your photos. Otherwise, the app works normally, with a home timeline, a follow feature, likes, and comments. Users don’t notice any difference in how the app works when using it with Dropbox.

Except now your reInsta photos are ordinary JPG files in your reInsta folder of your Dropbox, that work seamlessly with reInsta, but also can be used like any other image files, such as in PC apps, photo albums etc. outside reInsta. Also, users give permission to reInsta and if they don’t want reInsta to have access to the photos anymore, they can disconnect the app from their Dropbox, and still have access to the photos themselves.  As we say on the reInsta site:

Of course, our goal is to be a service with the community in mind, built upon honesty, by humans with morals. But if we die tomorrow or swallow an “evil-pill” you still have your data in your Dropbox. When you leave reInsta, you take your photos with you. They were always there. It’s not just a contractual agreement, but a matter of physical control because it’s your cloud.

The folks at the Personal Data Ecosystem Consortium have graciously allotted me a 10-minute slot to speak about reInsta at their upcoming Personal Clouds – Community Gathering February 26, 2013 in San Francisco.

I hope to see some of your there.