Earlier this year, I presented some findings on the shift, particularly among mainstream consumers, toward mobile (smartphone and tablet) and away from traditional desktop and laptop computers. That data showed mobile devices had surpassed computers as the way people accessed the web. I asserted:

if you’re building a product or service and it isn’t designed with mobile first, it’s time to re-think it 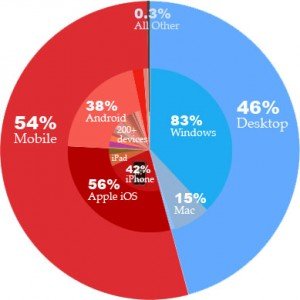 My conclusion was then, and continues to be, that we have reached the end of the PC-era and are now well into a world dominated by smartphones and tablets. This is something that has been predicted for a long time, but now it is really here. We are starting to see my earlier findings echoed in independent research. Consider these recent headlines:

Not only are people using their smartphones and tablets, but more and more people are using them exclusively (i.e. they dont use a PC or laptop anymore):

Nearly two-thirds (60.2 percent) of mobile users would prefer to use a smartphone or tablet to access Facebook

The trend is clearly toward touch and emotive content and away from dense text and ad-laden PC browser style content.

In my experience, developers and entrepreneurs are still in denial that this mobile, tethered, and touch-centric world is here now. There are the exceptions that clearly “get it” of course, like Path, Pinterest, Instragram, and Flipboard, but it is much more common to find entrepreneurs launching a new product and saying things like “we will solve the mobile problem later” or ” we will convert it to mobile later.” Looking at things that way might work in the enterprise, but not for consumers. It’s way too late to still be considering mobile the exception, something to be dealt with “later” but I find it all the time among developers too (another entire blog post of its own).

Even apps or web sites that embrace mobile often don’t go far enough. Many still take the approach of leaving certain features and functions out of the mobile version. This applies even to many larger, well-known services (Facebook comes to mind). They model their interface on the assumption that the user will perform some operation or task “later” when they get back to their PC. That is fundamentally an archaic model. The is no “later” in the post-PC era in which we now live – Many users don’t have a PC at all, or don’t use it any more. Of those people that have PCs, many would prefer not to use it – they want to use your service on the device they choose, which increasingly means their smartphone or tablet, not the device your service forces them to use.

← No, Apple should not chase the Android release cycle train wreck
Another sanity check on the “Android is killing Apple” meme →