A little over a month ago, my good friend and colleague, Mark Petrovic, had an idea for a project/service. That idea evolved into taglets.org, which we introduced today.

At first, to be honest, it was not obvious to me how it would be used or by whom. But Mark is smart and I trust him. So that was enough for me. It was also a perfect opportunity to get some hands-on experience with the Google App Engine platform.

Now that the idea is actually operational and I’ve had some time to play with it, I’m very intrigued by the potential for Taglets. It’s got some of the traits of the biggest ideas, being simple, general, and flexible.  As Mark says:

The service is first a platform, with a reference implementation layered over it via the www.taglets.org web site, with the platform defined by a public API that developers can use to create and manage users, tags, and comments. 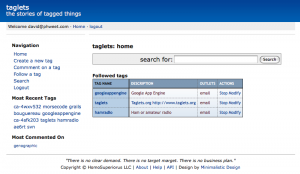 While it may look at first glance that this is a twitter clone of some kind, the fact is, Taglets is not intended to replace anything else.  It’s fundamentally different.  For marketing people, that spells disaster; but in this case, that’s fine, because many of the best ideas never had a business plan, target market, or clear demand.  If you ask “what problem does this solve” the answer will be, “you tell us.”  It’s open and flexible, and like many things before it, we have no idea how Taglets.org might get used, ultimately.

Here are some examples of how Taglets.org is different:

Taglets.org allows a person to send a message to “something” even if that “something” is not yet tagged and has no recipients. They can simply create a tag for it and send a comment, even if it goes to nobody.

A “tag” can be something as finite as, say, a device’s MAC ethernet address, or as abstract as an idea. It can be a person, a category, a blog name, a company, or a product.

You can learn more at the Overview page on the Taglets.org site. There’s also a Google Group at: http://groups.google.com/group/taglets