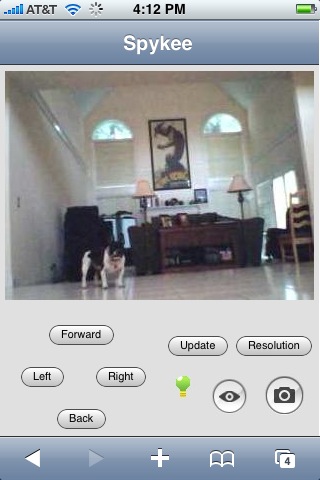 At left you’ll see my first cut at a rudimentary Spykee mini-console for iPhone.  If you’re familiar with the standard PC or Mac Spykee console app, you’ll recognize many of the functions.

This app only implements a sub-set of the full PC and Mac consoles.  I basically wanted to get some minimal functionality working before going too crazy with the UI and more esoteric features.  Here’s what it will do:

(1) Move the robot, using the left, right, forward, and back buttons.  Each press of the button moves a fixed amount.

(2) Turn the camera LED light on and off.

(3) Tell Spykee to take a snapshot.

(4) Turn ‘Video surveillance’ mode on and off.

Most importantly, the app shows you on the iPhone what the Spykee is seeing. It does not stream video in this version. It updates the “viewport” image periodically when the scene changes (or on demand with the ‘Update’ button). This keeps bandwidth usage down and still gives you a view of what the robot is seeing — and it even works on slow Edge connections.

It’s got another feature to help when controlling Spykee from a slow iPhone connection, where using the ‘Resolution’ button, you can flip between a lower resolution (but much less data) image and the normal full resolution Spykee view. This, and other features of the app, are demonstrated in the video below.

I made a video to show that, while this is still a hack, and is not ready to distribute by any means, it does actually work in real life, with a live robot. If I just provided the above screenshot, there’s no way to tell if it’s just a mock-up.

The video shows some of the basic functions as well as limitations. Even with those limitations, it is pretty cool (if I do say so myself), to be able to sign in and view what Spykee is seeing from anywhere, with just the iPhone without lugging around a PC or Mac, and even on a slow Edge connection.

← Spykee wi-fi robot – first looks
Nokia N97 – when will they get that it’s not just about a touchscreen? →